A fire broke out at Europe’s largest nuclear power plant in the early hours of Friday morning following what Ukraine said was a Russian attack, a day after Vladimir Putin declared that he would prevail in the invasion “whatever happens.”

Dmytro Kuleba, Ukrainian foreign minister, said the Russian army was attacking “all sides” of the Zaporizhzhya nuclear power plant in the south-east of the country and called for an immediate ceasefire. The Financial Times could not independently confirm the source of the fire.

As reports of the fire emerged, US President Joe Biden discussed the blaze with his Ukrainian counterpart Volodymyr Zelensky. Biden urged “Russia to stop its military activities in the area and allow firefighters and emergency responders to access the site”, according to a White House account of their call.

At around dawn, the State Emergency Service of Ukraine reported that “a fire in the educational and training building of Zaporizhzhya nuclear power plant. . . has been eliminated ”and said there were no victims. It gave no further details.

A senior US official said the latest information showed “no indications of elevated levels of radiation” but that the White House was monitoring the situation closely.

Jennifer Granholm, US energy secretary, said she had activated her agency’s nuclear incident response team and reiterated that no elevated radiation readings had been detected. “The plant’s reactors are protected by robust containment structures and the reactors are being safely shut down,” Granholm said on Twitter.

The International Atomic Energy Agency said Rafael Mariano Grossi, its director-general, had spoken to the Ukrainian prime minister and the country’s nuclear regulator about what it described as a “serious situation” at the plant.

The IAEA subsequently said the Ukrainian regulator had reported no change in radiation levels at the facility. It added that the fire had not affected “essential” equipment and that personnel at the facility were taking “mitigatory actions”. The agency said the regulator had informed it that battles were raging in Enerhodar, a few kilometers from the plant.

“Director-General Grossi appealed for an immediate halt to the use of force at Enerhodar and called on the military forces operating there to refrain from violence near the nuclear power plant,” the IAEA said. 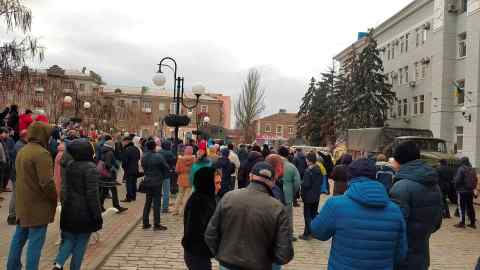 The fire followed a day during which Russia subjected the Ukrainian port of Mariupol and the cities of Chernihiv and Kharkiv to relentless bombardment.

Russia said earlier that its troops had taken control of the territory around the plant, located 200km up the Dnipro river from Kherson.

The fire came a day after Putin appeared on state television to say he would “never give up [his] conviction that Russians and Ukrainians are one people ”, adding that Russian troops were fighting“ heroically ”.

Markets reacted negatively to the fire at the plant, with Tokyo’s Nikkei 225 falling by as much as 3 per cent before recovering to trade 2 per cent lower.