Sri Lanka faces an escalating debt crisis after Russia’s invasion of Ukraine has wrecked two of its largest tourist markets, with analysts warning that the economic fallout of the conflict has increased the chance of default.

The south Asian island has for months struggled with power cuts and shortages as its depleted foreign exchange reserves leave it struggling to import oil and other essentials. It has an estimated $ 7bn in overseas debt and interest repayments due this year.

President Gotabaya Rajapaksa’s government has argued that a revival in tourism and exports would help Sri Lanka replenish foreign currency reserves and navigate the crisis.

Two countries have been vital to this strategy: Russia and Ukraine, the first and third-largest tourist markets this year respectively. Russia is also the second largest market for Sri Lankan tea, the country’s main goods export.

The disruption to trade and tourism, along with surge in global oil prices, has dealt a fatal blow to this strategy, argued Murtaza Jafferjee, chair of the Advocata Institute think-tank. “The economic crisis was already full blown leading into this [war], ”He said. This “has now extinguished all hope”.

Sri Lanka, Asia’s largest high-yield bond issuer, owes about $ 45bn in long-term debt and several downgrades, following tax cuts and the collapse of tourism because of Covid-19, left it unable to refinance. It is now at risk of joining countries such as Zambia and Belize in defaulting during the pandemic.

Colombo had foreign currency liabilities of $ 1.8bn for both February and March and usable reserves of less than $ 1bn, according to analyst estimates of central bank data.

The fallout from the conflict is an unwelcome twist, with authorities having grown reliant on tourists from Russia and Ukraine as traffic from India and western Europe was disrupted by Covid-19 travel restrictions.

About 20,000 Russians and Ukrainians traveled to Sri Lanka in January, accounting for more than a quarter of visitors, according to the Sri Lanka Tourism Development Authority. In January 2018 they made up less than 10 per cent.

While Ukrainian airspace is closed, industry participants fear the economic disruption could weigh on visits from Russia, too.

“Ukrainian and Russian tourists were coming in significant numbers as the arrivals from other nations had dropped,” said M Shanthikumar, who runs the Hotels Association of Sri Lanka. “Their absence now due to war could cause a huge slump again.”

Jayampathy Molligoda, chair of the Sri Lanka Tea Board, added that a prolonged conflict would have a “severe” impact on the tea trade if the ruble weakened and Russian banks were unable to use the Swift system. 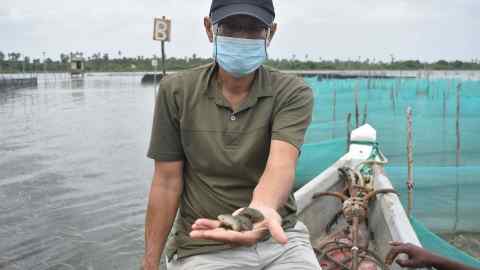 The economic crisis has become increasingly painful for Sri Lankans, with power cuts that last hours and rampant inflation, which prompted the central bank to raise interest rates last week.

Rajapaksa’s government has vowed to put an end to power cuts, signing a supply deal with state-owned Indian Oil Corp, according to Reuters.

But many investors believe it is only a matter of time until Sri Lanka is unable to repay. A $ 1bn sovereign bond is due in July, while analysts estimate Sri Lanka owes as much as $ 1bn to India this month in deferred payments through the Asian Clearing Union.

For the hundreds of Ukrainian tourists stranded in Sri Lanka, their holiday has turned into a nightmare.

Dmytro Cherednyk and Oleksandra Kovalova, a couple in their 20s who visited Sri Lanka’s southern beach resorts, watched helplessly as their families fled to Kyiv. “I hope this will end soon so that we can get back to our families,” Cherednyk said.