Ukraine renewed its efforts on Thursday to rescue civilians trapped in towns besieged by Russia as the two sides prepared to begin the highest level talks since the start of Vladimir Putin’s invasion.

Against the backdrop of another night of heavy shelling and missile attacks, the foreign ministers of Ukraine and Russia were due to hold discussions on the sidelines of a conference in Antalya, Turkey, although a negotiated path to peace remained far from clear.

After more than two weeks of grinding war, Russia’s faltering campaign has laid waste to urban areas but remains well short of its main objectives, with the biggest cities still under Ukrainian control and its skies contested. More than 2.1mn civilians have fled the country.

As Volodymyr Zelensky, Ukraine’s president, accused Russia of “war crimes” after missiles destroyed a hospital in the embattled city of Mariupol, western officials warned that Moscow might resort to more devastating unconventional weapons as it grew increasingly desperate over the war.

While Russia and Ukraine have held several rounds of mid-level talks at the Ukraine-Belarusian border, there have been no signs of a breakthrough to date, with only limited progress made around humanitarian issues.

Thursday’s talks between Russian foreign minister Sergei Lavrov and his Ukrainian counterpart Dmytro Kuleba were brokered by Turkey and are the first time senior ministers from the two countries have met since the invasion began on February 24.

Before they began the two sides appeared to remain far apart in their respective demands.

Kuleba on Wednesday said Kyiv wanted a ceasefire, the liberation of territories under Russian control and humanitarian relief for its civilians. But Kyiv has signaled it might be willing to compromise on the growing demand for Ukraine’s future neutrality, on the condition it is granted security guarantees from its neighbors or other world powers.

At times, Moscow has also subtly softened its language around regime change in Kyiv. But fundamental differences on other issues, including Russia’s territorial claims on parts of Ukraine, make the prospects of a substantial breakthrough low.

For the third successful day, Ukraine proposed six humanitarian corridors to take people out of Mariupol, Volnovakha, Izyum, and other besieged cities into “safe cities of our free Ukraine”, as it urged Russia to uphold a promised ceasefire.

Zelensky said that on Wednesday Ukraine had managed to organize evacuations from the eastern city of Sumy, from cities and towns under Russian siege in the Kyiv region, and from Enerhodar, the site of the Zaporizhzhya nuclear power plant. In total, about 35,000 people had been rescued, he added.

But repeated attempts to evacuate civilians from some of the hardest hit cities have largely failed, with Russia and Ukraine trading accusations of ceasefire violations.

People in Russian-besieged Mariupol, which had a population of more than 400,000 before the war, have been living in appalling conditions for more than a week after basic services including light, heating, water and internet connections were knocked out by intense Russian bombardment.

According to news organizations and social media reports from the town, people have been collecting rainwater to drink, cooking food on outdoor fires, and burying people killed during the bombardment in mass graves.

António Guterres, UN Secretary-General, condemned as “horrific” the bombing of the hospital in Mariupol on Wednesday. “End the bloodshed now,” he wrote on Twitter.

While fighting continues on the outskirts of Kyiv across three fronts, western officials say a massive armored column to the north-west of the capital has made little progress for more than a week.

British defense officials said on Thursday that it was “suffering continued losses” and that Russia had markedly reduced its air activity in recent days, probably as a result of “the unexpected effectiveness” of Ukrainian defenses.

Western officials have said Russia is using brutal and indiscriminate weapons in urban areas, including cluster munitions. The UK Ministry of Defense said on Wednesday that Russia had confirmed its use of a thermobaric weapon in Ukraine, which creates “incendiary and blast effects” that have a “devastating impact”.

Jen Psaki, the White House press secretary, said it was “horrifying to see the type of barbaric use of military force to go after innocent civilians”. Psaki later said Russian claims that the US had helped Ukraine develop a biological and chemical weapons program were “preposterous” and warned of the possibility that Moscow would use the claims to conduct a “false flag” attack in Ukraine.

Zelensky has repeatedly called for the west to impose a no-fly zone, or send fighter jets to Ukraine, with no success. The Pentagon has rejected a proposal to transfer Polish MiG-29 fighter planes to Kyiv, warning it could provoke a wider war. 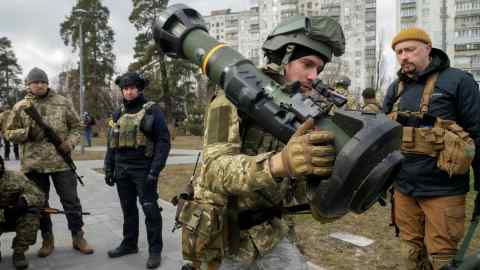 Antony Blinken, US Secretary of State, said such a transfer would “almost certainly lead to direct conflict between the US, and between NATO, and Russia”. US Vice President Kamala Harris arrived in Warsaw for talks on Thursday.

In a sign of the challenges facing Putin’s armed forces, the Russian defense ministry confirmed that some of the country’s conscript soldiers had been sent to fight in Ukraine, contradicting the president’s claim that such personnel were not involved.

Ukraine’s armed forces said that the invading Russian troops had reduced the intensity of their attacks, that soldiers were “demoralized,” and that the number of desertions and looting cases had increased significantly. Ukrainian military claims cannot be independently verified.

Yulia Gorbunova, a researcher with Human Rights Watch, told the FT this week that the watchdog group was receiving reports of invading Russian troops looting essentials including petrol and electronics that they feared might be used by local residents in Ukraine’s defense.