Before Russia invaded Ukraine, Wu Hao-chin had never heard of Javelin anti-tank missiles. Now, Wu is discussing their merits in urban warfare with his friends and argues that Taiwan should train its reservists to use them.

“Taiwan is very peaceful, so I never thought about war. But watching the Ukraine war on the news, it is dawning on us that this could happen here, too, ”said the 22-year-old economics student.

“It is heroic how the Ukrainians are defending their homeland. We may have to do the same when China attacks, but we are not ready. ”

Russia’s assault on Ukraine is serving as a wake-up call for Taiwan, where there is now greater awareness that the Chinese Communist party could make good on its warning to take by force the island it claims as its own.

“This Ukraine crisis reminds us that this threat is very real. A lot of people are suddenly paying more attention to self-defense, ”said Ho Cheng-hui, a law professor who founded Kuma Academy last year. The academy aims to educate the public about fighting and strengthen its will to resist.

Enoch Wu, a former special forces officer who has trained more than 8,000 people on defense issues and disaster response, has also noted a jump in public interest.

“We were planning on launching a series of resilience workshops in May or June, but decided to shift everything up this weekend,” he said. “Within the hour of the announcement going up, it was fully booked.”

Officials in Taipei believe Chinese president Xi Jinping would prefer to gain control over Taiwan without a fight. But they said the risk of China using force was growing as it realized that political and economic pressure was failing to overcome Taiwan’s opposition to being ruled by Beijing.

Until recently there was little sign of concern over that threat, despite Beijing piling greater pressure on Taipei with air and naval manoeuvres close to the island. According to recent polls, more than half of the Taiwanese public did not consider war likely.

“Taiwan sees that western countries are sending food and weapons to Ukraine but not coming physically, and that is something the Taiwanese did not imagine before,” said Alexander Huang, a professor of strategy and war gaming at Tamkang University. “People thought as long as the US military is close, we are safe.”

The US has a commitment to help Taiwan defend itself, although the language surrounding whether its military would directly intervene in a war is ambiguous.

“Now many people say‘ Ukraine today, Taiwan tomorrow ’,” added Huang, who also heads the international affairs department of the Kuomintang, Taiwan’s largest opposition party. “First it was Hong Kong, then it was the US’s retreat from Afghanistan and now this. The effect is a lot of accumulated anxiety that has been brewing under the surface. ”

President Tsai Ing-wen has avoided a broader debate about war and steered clear of rhetorical alarm over Ukraine’s conflict in part, according to senior officials, because Beijing could construct a high-profile defense drive as a provocative call to arms.

The White House sent a delegation led by Michael Mullen, former chair of the joint chiefs of staff, to Taipei last week as a sign of support. It is believed that behind the scenes, they discussed the need for Taipei to strengthen its defenses faster and more decisively.

“I told Mike Mullen that this is a rare opportunity that we can address the issue seriously,” Huang said.

Although the war over Taiwan would be conducted completely differently because the People’s Liberation Army would have to cross the Taiwan Strait, the Ukraine war has been instructive.

“The difficulties with getting paratroopers in showing how important functioning air defenses are,” said Sheu Jyh-shyang, a researcher at the Institute for National Defense and Security Research, a state think tank.

“Our air defenses were modeled on the US, with big systems such as Patriot missiles. But we may not have air superiority like the US. We can see from Ukraine how useful small, mobile systems such as Stinger man-portable missiles and Javelin anti-tank missiles are in that situation. ” 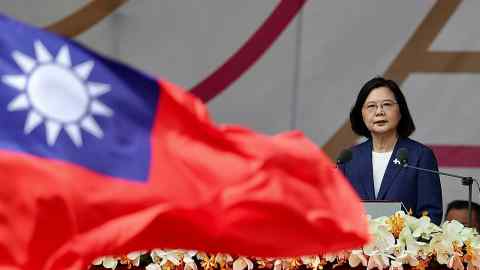 The war has also prompted debate over reinstating conscription and reforming Taiwan’s large but poorly trained reserve force. “If our reserve force were to play a role similar to Ukraine’s national guard, they would need heavier equipment and be trained in a different way,” Sheu said.

The debate goes to the core of Taiwanese society and how it functions. “In Ukraine, thousands have already fought in the conflict in the east, but we have nothing like that,” said Tan Le-i, secretary-general of the Taiwan Militia Association, a civic group.

“In our society, everyone expects the government to act, so there is very little bottom-up community organization, and mobilization will be very slow.”

The association is building a network of volunteers, teaching them first aid and training a small number of members to shoot. But Taiwan’s strict gun laws mean they must practice with air guns.

“If you are familiar with handling an air gun, training time on real guns would be shorter,” Tan said. “Training for a disaster situation needs to happen regularly; you need to build these skills into your muscle memory. ”

The battle for Ukraine has galvanized many Taiwanese, including Wu, the student, who has signed up for a first-aid seminar this month. “I have to start somewhere,” he said.