The US has accused Russia of preparing to fabricate an attack by Ukraine or the west to use it as a pretext for an invasion of the country, including circulating a “propaganda video” with graphic images of a mock explosion.

Senior Biden administration officials revealed the information on Thursday, as tensions flared up again between Washington and Moscow over Russia’s military build-up in Ukraine.

While talks between Moscow and Washington to defuse the stand-off through negotiations are continuing, Vladimir Putin, Russia’s president, has continued to escalate his military preparations for an attack, while Joe Biden, US president, dispatched 2,000 troops to Europe this week, including new deployments to Romania and Poland on Nato’s eastern flank.

The US had previously warned that Russia was planning a “false flag operation” as an excuse to attack Ukraine, but went further on Thursday.

“We have information that one of the options the Russian government is planning is to stage a fabricated attack by Ukrainian military or intelligence forces against Russian sovereign territory, or against Russian-speaking people, to justify military action against Ukraine,” a senior Biden administration official said. “We believe that Russia has already recruited those who will be involved in the fabricated attack and that Russian intelligence is intimately involved in this effort.” 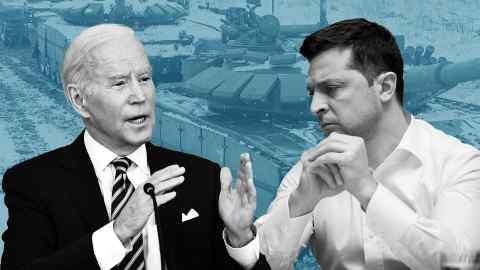 The US official added Washington believed Moscow would produce a “propaganda video” to bolster its claim to an invasion: “This video likely will depict graphic scenes of a staged false explosion with corps, actors depicting mourners, and images of destroyed locations and military equipment . ”

“We believe that the military equipment used in this fabricated attack will be made to look like it is Ukrainian or from allied nations,” the official added, pointing specifically to the possible inclusion of Bayraktar drones, which Kyiv purchased from Turkey, to implicate NATO. .

The US’s frequent public warnings about Russia’s intentions have created tensions with Ukraine, where officials have tried to minimize the damage to the economy and avoid panic about the threat of an invasion. This week, White House spokesman Jen Psaki said the White House was no longer using the word “imminent” to discuss a possible attack, because that implied Putin had already made a decision.

Oleksii Reznikov, Ukraine’s defense minister during a briefing on Thursday said: “I want to draw your attention to the fact that our western partners, strategic partners, have changed their rhetoric. And you can hear this, including from the words of the White House press secretary. ”