Equity markets have been very sensitive to headlines on the war in Ukraine.

US stocks climbed in afternoon trading in a rally underpinned by gains in megacaps and tech shares. Benchmark Treasuries reversed an earlier slide, while oil declined on China lockdown concerns.

The S&P 500 rose for a third day, closing up 0.7% after falling as much as 0.6%. The tech-heavy Nasdaq 100 jumped 1.6%. Both indexes settled just off session highs. Oil tumbled as China’s worsening virus resurgence boosted concern over demand in the world’s largest crude importer.

Equity markets remained sensitive to headlines on the war in Ukraine, dipping earlier after a report several peace negotiators suffered symptoms of suspected poisoning after a meeting in Kyiv earlier this month.

“This is a difficult market to make sense of because it’s unusual that we have so many factors at work,” Marc LoPresti, managing director of The Strategic Funds, said by phone. “But I think at the end of the day, the American economy remains strong. American consumer demand remains strong. We’re seeing continued improvement in the job market. All of those indicators do seem to imply that there is a healthy foundation in terms of the US economy. ”

Tesla Inc. gained after saying it plans to seek shareholder approval for a move that would enable another stock split. Bloomberg previously reported the electric-vehicle maker was extending the temporary shutdown of its car plant in Shanghai due to surge in cases in the city.

Apple Inc. extended its rally to a 10th day, the longest run since 2010, clawing back losses earlier in the day sparked by a report that it is cutting production of its iPhone SE line. Crypto stocks gained as Bitcoin erased it 2022 losses.

The 10-year Treasury yield traded near 2.45%, from a session high of 2.55%. Earlier yields on five-year Treasuries rose above those on 30-year bonds, suggesting some investors expect an economic downturn. The dollar gained versus most of its major peers.

A growing number of money managers are betting equity indexes have already largely priced in bearish bond moves, as equity strategists from Goldman Sachs Group Inc. to JPMorgan Chase & Co. reassure stock investors that there’s no need to fret about US Treasury yield curve just yet.

In the latest geopolitical developments, Turkish President Recep Tayyip Erdogan said he will meet with Russia and Ukraine delegations in Istanbul on Tuesday. President Joe Biden tried to temper comments calling for the removal of Vladimir Putin by saying the US is not seeking regime change in Moscow.

On Monday, Biden unveiled a $ 5.8 trillion budget, with a proposal that emphasized deficit reduction, additional funding for police and veterans, and flexibility to negotiate new social spending programs. 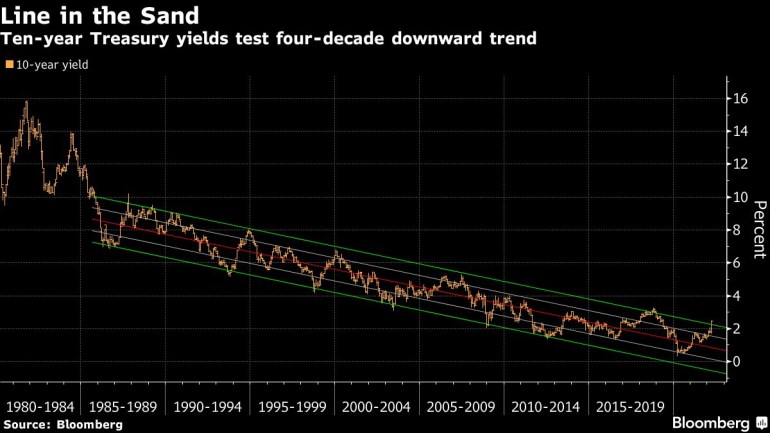 Some key events to watch this week: