The US has told allies that China has signaled its willingness to provide military assistance after Russia requested equipment including surface-to-air missiles to support its invasion of Ukraine, according to officials familiar with American diplomatic cables on the exchange.

Two officials familiar with the contents of the cables said Washington had told allies that Russia had asked China for five types of equipment, including surface-to-air missiles. The other categories were drones, intelligence-related equipment, armored vehicles, and vehicles used for logistics and support.

The cables, which were sent by the US state department to allies in Europe and Asia, were not specific about the level or timing of any assistance that may be provided to Moscow by Beijing. One of the officials said the US had not provided allies with the intelligence underpinning its assessments.

The Financial Times reported on Sunday that Russia had made the request for assistance at some point after the start of the now three-week conflict.

The Russian request and Chinese response have sounded alarm bells in the White House. US officials believe China is trying to help Russia while its top officials publicly call for a diplomatic solution to the war.

The Chinese embassy in the US on Sunday said it had no knowledge of any Russian request or positive Chinese response to Moscow. Russia on Monday also denied making any request to China.

A senior US defense official declined to say if China had provided military support after a request, but said the Pentagon was watching the situation “very, very closely”.

“If China does choose to materially support Russia in this war, there will likely be consequences for China,” the defense official said.

The official added: “We have seen China basically give tacit approval to what Russia is doing by refusing to join sanctions, by blaming the west and the United States for assistance that we’re giving Ukraine [and] by claiming they wanted to see a peaceful outcome but essentially doing nothing to achieve it. ”

Eric Sayers, an Asia security expert at the American Enterprise Institute, said the list of equipment requested by Russia was “shocking” and “speaks to Moscow’s desperation.”

“If Beijing transfers anything on the list I would expect a strong bipartisan push for sanctions and export controls focused on [China’s People’s Liberation Army]but that would only be the start, ”Sayers added.

“It would be a game-changer for global geopolitics,” Medeiros added. “We risk going back to the days of the Sino-Soviet alliance of the 1950s. Ukraine may become the first proxy conflict in a new cold war. ”

On Monday, Jake Sullivan, US national security adviser, met in Rome with Yang Jiechi, China’s top foreign policy official, which another senior US official described as “an intense seven-hour session reflecting the gravity of the moment.”

The US official said the meeting included an “extensive conversation” about Russia and Ukraine, adding that the two officials had also held a one-to-one meeting without their aides.

The official declined to comment on the FT’s reporting that China had responded positively to Russia’s request for military assistance. But she said Washington had “deep concerns with China’s alignment with Russia.”

Asked about the report, Jen Psaki, White House press secretary, said: “I am not in a position to confirm or detail any intelligence from here at this point in time.” The White House did not immediately respond to a request for comment about the types of equipment detailed in the cables.

On Monday, state department spokesperson Ned Price said: “We are watching very closely to the extent that the [People’s Republic of China] or any country in the world provides support, material, economic, financial, rhetorical or otherwise, to this war of choice that President [Vladimir] Putin is waging. 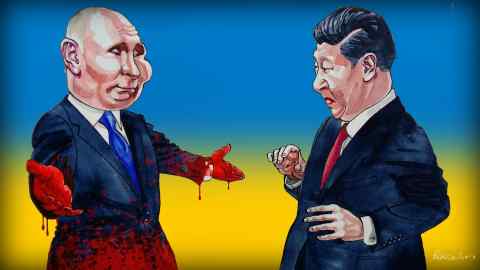 Ahead of the meeting between Sullivan and Yang, the Biden administration last week asked European allies to amplify their message to China that Beijing should not help Russia circumvent sanctions, according to one European official.

China has portrayed itself as a neutral actor despite its increasingly close ties to Moscow. But Chinese media and diplomats have offered support for Russia’s justification for the invasion and blamed the US and NATO for the conflict.

Beijing and Moscow have grown closer in recent years, largely due to their shared disdain for the US and western military alliances such as NATO. Last month, Xi Jinping, Chinese president, and Putin signed a statement in Beijing that described their increasingly close partnership as having “no limits”.