UK-Iranian dual national Nazanin Zaghari-Ratcliffe has criticized successive British foreign secretaries for failing to secure her release from Tehran earlier, arguing that it “should have happened six years ago”.

Zaghari-Ratcliffe, who last week returned to the UK after six years’ detention in Iran, told reporters on Monday that her experiences would “always haunt” her as she thanked her family, parliamentarians and the media for “tirelessly” campaigning for her release .

While her husband, Richard Ratcliffe, praised Liz Truss, foreign secretary, and the Foreign, Commonwealth and Development Office for their efforts, Zaghari-Ratcliffe admitted that she found it difficult to trust the assurances given to her by numerous previous foreign secretaries.

“I was told many, many times that‘ oh we’re going to get you home ’- that never happened,” the 43-year-old said at her first press conference since returning to the UK. “I mean how many foreign secretaries does it take for someone to come home? Five? It should have been one of them eventually, so now here we are. What’s happened now should have happened six years ago. “

Zaghari-Ratcliffe, who was employed as a media trainer with the Thomson Reuters Foundation, was arrested in Iran in April 2016 on spying charges – allegations that she has always denied. She flew back to the UK on Thursday, alongside British-Iranian businessman Anoosheh Ashoori, who was arrested in Iran in 2017. Ashoori has also denied the charges against him.

On the same week they were freed, the British government settled a £ 394mn debt owed to Iran for the purchase of Chieftain tanks that Tehran ordered before the 1979 Islamic revolution. London has insisted the issues were not linked.

Tulip Siddiq, Zaghari-Ratcliffe’s MP, told the press conference that she had written to the chair of the House of Commons foreign affairs select committee asking for an inquiry into why three Iranian officials who traveled to the UK in 2013 to discuss the debt were arrested . She also wanted the committee to investigate why a deal was made last year that subsequently “fell through”.

“I also want to look at the wider issue of taking hostages, which Iran has done,” the Labor MP said.

Speaking during Monday’s press conference, Zaghari-Ratcliffe described herself as one of the “lucky” ones, arguing that there were countless others who remained detained by Iran.

“I believe that the meaning of freedom is never going to be complete until such time that all of us who are unjustly detained in Iran are reunited with our families,” she said. 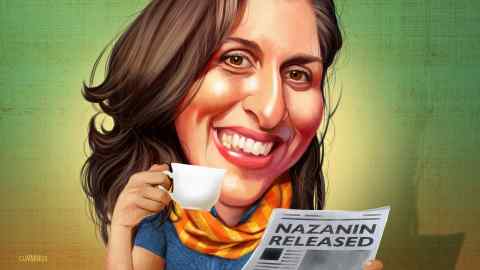 Morad Tahbaz, an environmental activist and businessman with British, Iranian and American citizenship, was arrested in Iran in 2018 and later sentenced to 10 years in prison for alleged spying.

The 66-year-old has denied the charges against him and, according to family members, has fled a hunger strike.

His daughter Roxanne, who also took part in Monday’s press conference, said her family were told that her father would be included in the deal to release Zaghari-Ratcliffe and Ashoori. “We’re truly devastated knowing now that this was not the case,” she added. Her mother has also been served with a travel ban within Iran.

Downing Street on Monday said the government was in regular contact with Tahbaz’s family and were continuing to lobby Iranian authorities. “We are working very closely with the United States to secure his permanent release and departure from Iran,” the prime minister’s spokesperson said.